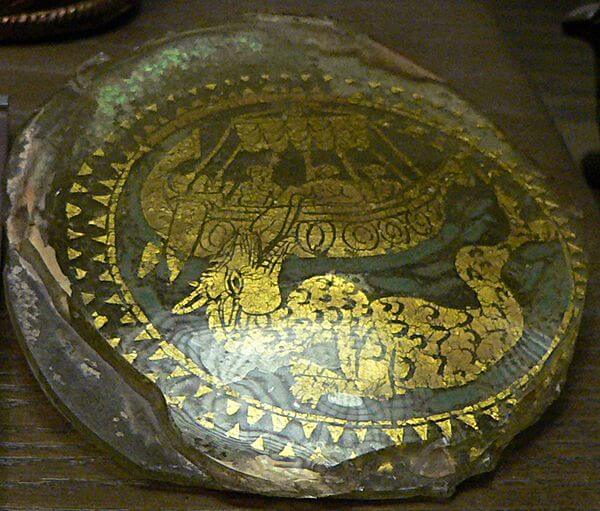 Gold glass or gold sandwich glass is a luxury form of glass where a decorative design in gold leaf is fused between two layers of glass. First found in Hellenistic Greece, it is especially characteristic of the Roman glass of the Late Empire in the 3rd and 4th century AD, where the gold decorated roundels of cups and other vessels were often cut out of the piece they had originally decorated and cemented to the walls of the catacombs of Rome as grave markers for the small recesses where bodies were buried. About 500 pieces of gold glass used in this way have been recovered. Complete vessels are far rarer. Many show religious imagery from Christianity, traditional Greco-Roman religion and its various cultic developments, and in a few examples Judaism. Others show portraits of their owners, and the finest are “among the most vivid portraits to survive from Early Christian times. They stare out at us with an extraordinary stern and melancholy intensity”. From the 1st century AD the technique was also used for the gold colour in mosaics.

Various different techniques may sometimes also be described as “gold glass”. Zwischengoldglas is very similar but the two layers of glass are cemented, not fused. It mostly comes from Germany and Bohemia from the 18th and 19th centuries. Verre églomisé properly covers a single layer of glass which is gilded (or coated with other types of metal leaf) on the back, as used in 19th century shop signs and the like. One process was revived by Jean-Baptise Glomy (1711–1786), hence the name. Both of these processes were also used in ancient times, and the German and French languages often use their native terms for what is called “gold glass” in English. Gold ruby glass or “cranberry glass” is actually red, coloured by the addition of gold oxide. Gold-band glass is another ancient technique covered below.